Presented at the 2019 OutLines Undergraduate Symposium.

I can’t relocate my words at every point and direction whenever I’ve been shut down for my use of languages. I find myself muttering to classmates for reassurance, summoning professors on how I can achieve, and looking for answers between my identities and languages from classroom to my ends. How do my words sound? How do my words diverge from point A to point B? How do they rise and how do they merge? I scramble with words and how they are supposed to be, and I scramble with my security as a student, as a writer, as an urban dictionary translating for white classmates. I’ve been endured more as a sassy Black supportive character than a multi-dimensional writer.

Slip up “fam” here, a dash of “wallahi” there, drop my g’s and elongate or chop up my words, so people change the way they look at me because my language is not put together as they like it and as they are familiar to it. On top of that: I’m Black. Obviously Black in the sea of passing white folks. To markers, to peers, my language is not quite formed. The predominate white faces I’ve passed by in my education slow down their words to me, write in red x’s and conquering question marks that take up bare space on my page, they pull me to the side and ask me if I understood the lesson. To them, I am a joke, a vessel possibly not taking school seriously. Or that I am like my mother and father who are simply passing by speaking and writing in fragments of English. To pass by and survive, I require the most excellent strains of Englishs that overshined and overperformed in my collections from readings: Shakespearian, Victorian, Academic, white Standards, white examples. And still, the words never quite felt mine. With my words come a structure and with my mother’s melting and stirring mixtures: Somali, Italian, Arabic and fragile fragments of English, she has always made sense. Still, the distance between speakers, writers and thinkers racially is a far, treacherous route to common grounds and understanding. 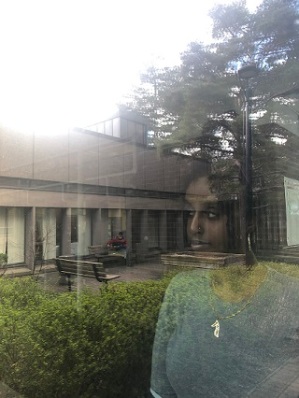 I’m not sure if my professors and my classmates will take it kindly if I speak or write outside of the parameters of proper English. Otherwise, how could I ever move up the ranks, be taken seriously, or gain respect without switching up on my phrases, pronunciation, and poise? I’ll speak quieter, I’ll write neater, I’ll remove the joy I get from my language to suit somebody else’s.

If I really need to.

I head for the top of the old student centre and beeline for York University’s Black Student Alliance office. Often deemed “our safe space,” I walk in linking up with other Black students like it’s a celebration, greeting each other in onomatopoeias; ah ah ah and jeez. And not once have I felt out the loop or misunderstood, we mixed our languages, we exercised English, our experiences within, and we big’d up one another as our travels through akademia and discrimination featuring similar terrains resurface. Based on how our swirling languages and identities carried our form out to the open and out onto the paper, we broke it down:

“Soon as you come to Canada, it’s like yo – you don’t know shit. You’re not part of this country,” says Zenab. Her father holds a master’s in political science and is fluent in Russian. And we silently deep that our parents are not given the spaces they need to work in this mosaic country.

We understood different plays of expression and emphasis – even if we added improper suffixes to words. The main point is to understand and to be understood. If it’s jokes – it’s jokes. If it’s fire, it’s fire. Affirming phrases such as jeez, say wallahi, and intelligently crafted metaphors were hung in our slick movements between specific spaces. But we still juggled how teachers thought we have stolen someone else’s writing when we make switches in our languages. I have been accused, without any concrete proof, because a teacher said, “it doesn’t sound like you and it isn’t possible,”. I sunk. Spending years perfecting and eating up a particular English and regurgitating it right back out on the page now felt astray. And other times, I face overachieving with my Englishs to prove something about my identities.

To get that A. Because I got to.

When successfully living and moving in Perfect English, it makes Me, and my friends howl and jest as we finesse, secure, and recalibrate like a cracked compass: kawaaling. This term is a mish-mash of new Somali, rumored Swahili and English by the end. It codes for “you thought !” against people who think you couldn’t pull the means of securing that A, that job, a higher position where language needs to get me there.

English moves too. English as it is understood, as it is a sound, as it is a weapon, it is constantly in motion. As my Somali peers and I have moved and been moving, language transforms alongside us. If Shakespeare (who we call Sheikh Speare) could invent swagger, then why couldn’t we? Because they think we do not own English.

With language encompassing my vision, switching up the words based on space to space, whether it was amongst friends or the bleak tutorial sessions on campus, I struggle with my visible confidence. My white peers find misspelling to be light and easy, whereas it terrifies me to the point I’ll misspell a word on the doc on purpose just to see if I really got it right. I’ve been marked less before and ironically not for spelling…but because my professor didn’t care to read my assignment thoroughly as he told me. I had to speak up. I had to point it out. I had to switch. It made me squirm. How much I extend myself for my languages.

By now, the space around us operates as a barricade of basic understanding. If the Black, armored walls of YUBSA splashed with golden art, the great collage of photography containing Black momentous joy and achievement could talk on its own, it would speak on the many instances of professors flicking off students for their way of expressing and breaking down language.

Still, in the spaces between or built or destroyed – the central root holds three lines where I map out why there is a raging, silent war between Somali English speakers and writers, other Black students alike, and the institutions that hold their marks and worths: 1) language(s), 2) racism via marking and 3) displacement. 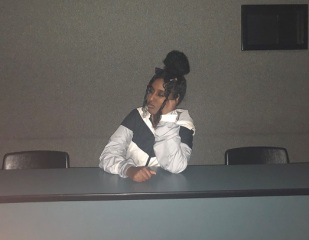 I heard too many instances that mirrored one another:

“They put me in ESL, even though I speak perfectly,”

“They convinced my brother he would be better off taking applied courses,”

“They told me I wouldn’t survive in University,”

These phrases became far too normal. Some Somali students go as far as to say that if anyone ever were to slither their attitude or common street expressions, they would be displaced if not convinced into applied classrooms.

I don’t always speak and write in one English but a cosmos of many that is fresh diaspora, ancestrally blue, and in tugs of war with ethnocentrism and a dissolving, salty assimilation. Even Somali scholars switched up, performing in Arabian descriptors and Italian codes in their journaling. And I would dash and revert in between cracks of Perfect English, which I’ll mimic to be taken more seriously. My domain holds mixes of all my languages tinted with experiences. But educators only make space for specific swings of languages despite my mosaic of experiences where with each slip of slang came danger like a mudslide; marking us lesser than.

I come across Somali students at the cold eastern hallways of Accolade enlightening me on their moves to ESL classrooms. “I am more than just my mother’s Somali. We are more than ‘wallahi’,” says Asma. Everybody says things like “wallahi”, but only non-white voices get to carry out what that really means everywhere else – an oath to God in a mish-mash of Arabic that keys in Somali folks. But it’s true that there is a switch and a process to it that does not disregard our security in between these languages. But nobody ever utters about the face inside and outside of the language.

I can’t transcend my cultural identity from writing. My languages are heavily impacted by the various spaces I freely move within. They are barriers between proper English and slang, just as there are lines drawn between Blackness and whiteness. Although (in)visible, the readers still feel conflicted. I may feel conflicted. When exercising my English, I think of caution and exposure later. They can see exactly who I am. They can assume hurtful things too. That I am ratchet. Hood. Too Black. I feel I constantly have to move fluidly and fluently between English(s). But I will make the most out of my language. I will do the most, with all my languages. For there is nothing wrong with where I come from and how I speak, I will move freely as I write. 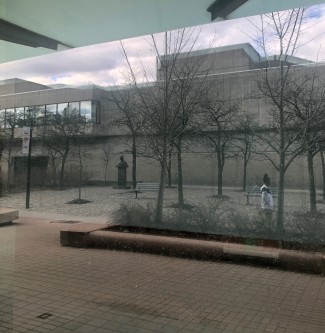 Movement is crucial. Through herds of families making way from the Horn of Africa to North America, and like the various twists and turns across classrooms, community centres, streets, government housing, I have learned time and time again how to speak and write in spaces – whether they are for me or against me. And Canada stands as a country proud of its non-white mosaic while instantaneously ripping apart, displacing, and marking us lesser than.

Placed in different language learning spaces, fear looms on code switching, identity and representation with the self and pool of languages. I could level down a little bit or I could level up with a flick of informal and formal speech. But in the spaces that are non-Somali, or non-Black where affirmations don’t mirror within. Language became a survival route at the end of the day. I settle in the cracks of the educational realms, and conversations with other Black students linguistically and slanging bounds of mutual understanding tell me that I am going to find room here. For language is mine to glide, mine to move with. They will see me. They will read me, still.

Sundus Hussein is a community performer, poet, and lover of words. Her
body of work comprises of experiments, quirks, and hidden codes. She is of
Somali descent and resides in Toronto where she has shared her bulldozing
articles and essays on current issues, stigma and personhood.

View all posts by prowritassociate